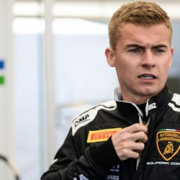 After the win in the opening round at the Temple of Speed, Karol Basz, at the wheel of Imperiale Racing’s Lamborghini Huracan Evo number 44 together with Vito Postiglione, dictated at the historic Silverstone Circuit as well, in the second round of the Lamborghini Super Trofeo Europa.

Despite being on his debut at the demanding British track, the Polish driver followed by Minardi Management adapted quickly to the pitfalls of the track taking top positions beginning in free practice and worked together with his teammate on the setup of the car without neglecting performance, as shown by the second place in the first round which ended only 45 thousandths of a second behind the best time.

The hard work carried out on Friday was repaid during the qualifying session when Karol Basz gained the second row of the grid on the strength of the fourth fastest time, repeating his teammate’s performance, before going on to take a strong win in Saturday’s race with a perfect performance.

The intense weekend closed with important points in view of the championship with fourth place in race-2 which left regrets at having let a win slip which would have made the weekend unforgettable and perfect. Taking off from fourth Place Karol Basz had taken control of the race on the strength of a hard rhythm which the direct rivals could not match but, at the change of drivers a technical problem with the door handle cost seconds and victory.

“After the win at Monza we managed to win here at Silverstone as well and this is surely very important for the continuation of the season, even if we are left with the regret caused by the problem with the door handle which cost us race-2. It was the first time for me at Silverstone and the track is really fantastic and above all we managed to be fast right from the start. On Friday we tried out some setups and gathered a lot of data which will be useful at Misano as well. I thank both Vita Postiglione and the Imperiale Team for the excellent job. I now await the next round to recover the points lost today,” commented Karol Basz.

“Luck certainly wasn’t on our side because after the win on Saturday we could have won race-2 as well. The episode at the change of drivers cost us 14”. We could have left Silverstone at the top of the ladder, whereas we are now 14 points behind. The race rhythm was really good as shown by Vito Postiglione’s comeback. We could have won with a nine second lead. We now await the test at Misano where in the Racing weekend we will try to win in both races. The championship is very competitive and you pay a heavy price for any error. However, even on a track as demanding as Silverstone Karol made no mistakes and he confirmed he is one of the protagonists of the Super Trofeo,” commented managers Giovanni Minardi and Alberto Tonti.

The next round is at the Misano Circuit, on June 22nd and 24th.

Karol Basz is part of the 2018 Lamborghini Young Drivers Program and is getting...