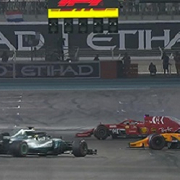 Another season is filed away and above all a weekend in which I personally experienced a number of emotional moments, beginning with the party for Fernando Alonso on Saturday evening with two world champions of the calibre of Lewis Hamilton and Sebastian Vettel who “escorted” Fernando Alonso. Independently of the number of titles, Nando was a great champion.

The extraordinary image contains all the beauty of this sport that continues to surprise and give me unique emotions. Despite the duels on the track between these young men and great champions there is great respect. Fernando Alonso experienced a weekend he will never forget, praised by all. It is a pity that nobody wanted to give him a car for 2019. It am sure today was not goodbye but a see you later.

The season went into the record books with Lewis Hamilton’s and Mercedes’ latest titles that show that once again they have no rivals. Bottas was subdued, finishing the season just behind Kimi Raikkonen on the driver’s ladder (third place behind Lewis Hamilton and Sebastian Vettel).

Next year Ferrari will be called upon to take another step in its development to oppose Mercedes’ domination as happened in the first half of the season in which it even took the lead in the World Championship. Sadly, it paid the price of a negative second half in which Kimi Raikkonen was not missing but Sebastian Vettel.

With the first day of collective tests on Tuesday the curtain will rise on the 2019 season which will give us a starting grid with many changes, one of which is Leclerc in red, hoping that he will be the right partner to give Vettel a boost.

A positive season also closes for the colours of the ACI Team Italia. The flagbearers Puccini, Fuoco and Ghiotto put themselves on display at Abu Dhabi in GP3 and Formula 2 respectively. These results must be a source of pride.

Arrivabene-Binotto, Minardi “The proper choice but the new developments are...
Scroll to top