Blog - Latest News
You are here: Home / Championships / Bhai Tech gets ready for the second half of the Championship as a lead... 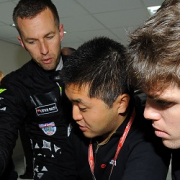 With the Spanish round at Jerez de la Frontera, Bhai Tech Racing has finished the first half of the season as the GTS class leader, having gained 46 points, so 4 points ahead of the first follower. The situation is positive also for the Team’s four racers, who are all rookies in a GT Championship; Giorgio Pantano and Rafael Suzuki are leading by 24 points and are third in the overall standing, 2 points ahead of the classmates Razia/Van Der Drift.

As a rookie in the International GT Championship, the Mestrino-based squad directed by Mr. Roberto Costa the engineer, whose headquarter is located in the advanced centre called “Advanced Vehicle Science Centre”, has demonstrated to keep improving every event, as proved by the first win taken at the Nurburgring in the third event. After the apprenticeship weekend at Le Castellet, points appeared in no time and, on the Portuguese track of Portimao, the McLaren MP4-12C #65 of the Italo-Brazilian pair Pantano/Suzuki finished in the top 10. But the masterpiece weekend came on the Nurburgring historic track, where both pairs scored an exciting double win in both races, hoarding points and making the team so happy. In Race-2 it was the pair Razia/Van Der Drift who crossed the line ahead of the teammates and in the Sunday’s final round Pantano and Suzuki took their own back by winning the race. “At the Paul Ricard everything was new for us and for the team. We’re working so hard to develop the car in every single detail and we’re reaching our goals step by step”, says Giorgio Pantano. His statement is echoed by his teammate “I think we learned a lot and we made good progress, considering we are a rookie (drivers, engineers, and all the team), I’m a bit surprised to see us leading team’s championship and both cars fighting for the championship title in GTS class at this point of the season. It’s gonna be a tough second half because all other teams are improving their pace and the championship is very competitive with a lot of cars in the same second”, ends the Brazilian Rafael Suzuki “ I think the team is doing a great job developing and studying all the details of the car. Bhai Tech is using all its resource, including the driving simulator and I’m sure we will be faster and faster until the end of the season.”

In the hot weather of Jerez de la Frontera, where the Championship’s turning point was held, the two McLarens #65 #66 almost finished on the podium, ending the first half as Championship’s leaders, going ahead to get good results “The turbo engine suffers high temperatures and sea level so much, so we had to drive a defensive race. Furthermore we got a 25’’ penalty per car. Despite that we were able to score important points for the Championship”, says Pantano.

Satisfaction also for Luiz Razia and Van Der Drift who almost finished on the podium with only 2 points behind their teammates “My only concern is the Mercedes team, they have a good car and they are competitive, on the other hand me & Chris, we have the challange on our own team with Rafael and Pantano, they are doing also a top job and they are just ahead of us on the championship. Hope we can keep up with them and keep on fighting in a fair way”, says the GP2 deputy champion Razia “I thinks it’s been very good to have already secured our first win, not only for Bhai Tech but for myself. Last year we already took pole position at Monza and we did that again at the Nurburgring but this time making that a victory!”, says Chris Van Der Drift.

The second half of the season will start in two weeks on the English track of Silverstone. 4 events during which the Italian team will try to preserve the leadership thanks to its drivers experience “At Jerez we served all our handicaps, so we’ll be more peaceful at Silverstone. Our car will suit the track very well, so we can make a good job”, says the F.1 ex driver and GP2 winner Giorgio Pantano “It will be nice to race at Silverstone, quite challenging circuit, and will be kind of a “home race” for us because of McLaren. I believe the track suits for our car, but nobody wins a race before the checkered flag, so I hope we can get the best of the setup during the free practice sessions on Thursday and Friday. Also we don’t have the handicaps that we had in Jerez”, says Suzuki.

Luiz Razia will race at Silverstone, strengthened by the win scored in GP2 in the past season. “It’s clear I’m the only driver of the four that have done a race on the new circuit, as I did race last year in GP2 and not only race but I’ve got a win also in 2012, so I’m really confident I can do a very good job at the weekend, I just wish could be dry all weekend, and Bhai Tech will be very strong. I’m sure me and Chris are really keen to be racing in Silverstone as our home is just 25minutes away from the circuit, so no hotels this time.”

“I think Silverstone is a circuit which will suit our McLarens really well, there are some fast corners like maggots and beckets which I’m really looking forward too. We keep improving as a team every event so we will just get stronger and I’m sure at Silverstone we will have a great result!”, says Van Der Drift.

Hands off the Young Driver Tests