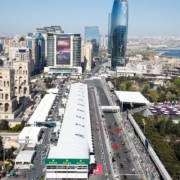 Azerbaijan is ready to host its fifth grand prix on the Baku street circuit. After last season’s “forced” break Formula 1 returns to the 6,003 metres of asphalt situation in the old part.

With three wins shared between Rosberg, Hamilton and Bottas Mercedes arrives as the big favourite, even if Red Bull (which boasts a win with Daniel Ricciardo in the 2018 edition) is galvanized by top place in both the ladders thanks to Verstappen’s win in Monte Carlo.

Keep an eye also on Valtteri Bottas who has already shown that he can go fast on this track. The Finn will want to try to redeem himself after the very unlucky pit stop in the Principality. It will be very hard to see Ferrari in the lead once again. Seeing the layout of the track it will not be able to benefit from the traction and in the two straights the Mercedes could really make a difference. For Ferrari a new direct challenge with McLaren is more plausible.

There has been a lot of talk in recent days also on the high costs of Motorsport and the desire to do something to help the young talent emerge and to prevent them from getting lost. It is always positive and important to keep the spotlight on these aspects but it is just as important (if not necessary) that the Team Principals themselves are the ones to go the race tracks to observe the young drivers and to help them in their growth and career.

In these years the Federation has worked a lot to lower the costs but unfortunately our sport is very expensive since it requires a large workforce between the mechanics, engineers, drivers and material. For this reason I believe it is the task of the Formula 1 teams to observe and identify the more deserving young drivers, as someone is already doing with the Academy by supporting the career step by step. Since there is a lot of talk about the budget cap, raising a young person is less burdensome than contracting a champion.

At least that is what I think…