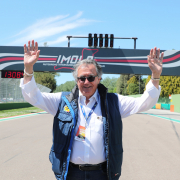 I expect a weekend full of appointments and passion. Even if at Spa the duel for the world title between Lewis Hamilton and Max Verstappen resumes after almost a month I expect many of you at the Imola Circuit for the fifth edition of the Historic Minardi Day. It will be a new beginning. We have put in place many protocols and we hope in the common sense and sportsmanship of all our fans and enthusiasts, as they have always shown in these years, for the weekend to unfold properly.

There is a lot of desire to go back onto the track, as the enthusiasts have shown which has allowed us to exceed 290 cars present, just like the data that is coming out of the early ticket sales. As always there will be two days of passion and entertainment with extraordinary cars that have made Motorsport history. There will be no lack of problems but we count on overcoming them with everybody’s help.

After the summer break the season restarts from a track that is as fabulous and demanding track as Spa-Francorchamps with a Mercedes that has partially recovered the gap with Red Bull. However, it is a Mercedes rattled internally by a number of rumours.

We are entering into the most complicate phase of the season where reliability will play a major, if not decisive, role in the final result. We expect three demanding circuits for the engine, in order: Belgium, Holland and Monza. Some teams have already mounted the third unit and must eventually decide when to take the penalty for a further change.

We are also entering into the hot part of the drivers’ market, even if the first confirmation has already come with the renewal of Fernando Alonso by Alpine. And it could not be otherwise… Two intense days await us and I hope to be able to meet you in the paddock and the pits of Imola.

F1 | GP BELGIUM, THE POINT BY GIAN CARLO MINARDI “THE ALLOCATION OF THE POINTS...
Scroll to top