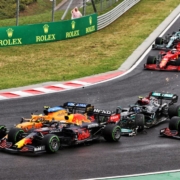 The weekend that just finished will be hard to forget in a hurry for both Esteban Ocon and Alpine’s absolutely unexpected win and for what happened at the first curve. Valtteri Bottas and then Lance Stroll played bowling with their rivals and scored a strike. It was a rash manoeuvre by the Canadian who tried to make up six places braking (so to speak) on the grass, colliding with Leclerc who in turn crashed into Ricciardo. The race was absolutely compromised also for Max Verstappen who in two grands prix managed to gather only one point.

In Hungary we witnessed an unpredictable grand prix even if the restart after the red flag with only Lewis Hamilton on the starting grid while all the other cars restarted from pit-lane will stay in the annals of the world championship. The many times champion gave his all and reached the finish line exhausted. From last position he climbed up to third place on a track where it is hard to overtake setting off a wonderful duel with Fernando Alonso. Nando showed all his worth by managing to keep him at bay for four laps which were essential for Ocon to take the win ahead of Sebastian Vettel.

With the last two grands prix the championship has livened up. Lewis Hamilton and Mercedes took the leadership again at Red Bull’s expense but anything can still happen. The gap between the two contenders for the title is not so big, even though Mercedes gave a demonstration of its competitiveness, safety and reliability, even if they made some mistakes.

It was a weekend that also highlighted how essential it is to put otgether a single work group for the whole season since once again we did not have uniformity in the decisions and penalties.

Bottas and Stroll got away with only two points on their drivers’ licenses and relegated five positions down the starting grid at Spa-Francorchamps while Antonio Giovinazzi and Kimi Raikonnen paid with a stop and go plus 10 seconds for speeding in pit-lane and the collision with Mazepin. In my opinion the marshals used a light hand with Hamilton as well. His behaviour in qualifying, at Perez’s expense, was punishable. For a similar manoeuvre Fernando Alonso paid five positions on the grid compromising his championship.

It was a good grand prix but the result was distorted at the start even though we must congratulate Alpine for a historic win. Important points also came for Alpha Tauri and especially Williams who were skilful in taking advantage of the situation.
After a break of a few days we will go towards the second part of the season which, due to the health emergency, we do not know how long it will be.

F1 | GIAN CARLO MINARDI “FI RESTARTS FROM SPA BUT I WILL BE WAITING FOR YOU...
Scroll to top