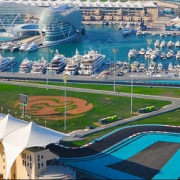 At the Abu Dhabi Grand Prix the curtain will fall on another season which has slipped away quickly amongst highs and lows for all the teams with the exception of Mercedes which once more ruled over all. Ferrari and Renault chased after the Silver Star, even though there is still a lot of work ahead for 2018.

A number of times we saw how much of an advantage Mercedes has over the others and save for an unexpected turnarounds or the acquisition of knowhow by the opposition it were be very difficult to close the gap. The Circus comes to a track that is conditioned by changes of temperature during the whole weekend as well as during the race since it starts at sundown and finishes during the night with the artificial lighting the only illumination. Unlike last year Pirelli will bring the softest mixes Ultra-Soft, SuperSoft and Soft which will give us new track records.

We come to the final race of the season with some verdicts still to be made, such as second place amongst the drivers with Sebastian Vettel who holds a strong lead over Valtteri Bottas and the three way struggle between Toro Rosso, Renault and Haas for sixth place which has at stake the grand sum of twelve million dollars deriving from the television rights. This is an important percentage of the 2018 budgets.

Thanks to an extraordinary season Force India will be able to face up to the Yas Marina Circuit without pressure or worries after having long since won fourth place in the world championship (for the second straight year). Despite the hardships faced in these years it has shown that it possesses a strong and united team which is able to take advantage of its resources in the best way possible. They are the image of a team of other times. It is a well established family.

Before pensioning off these racing cars and in expectation of Halo’s debut, we have some Pirelli tests in front of us. It will be a hot winter on the drivers’ market front since there are still pieces missing in both Williams and Sauber and we hope that there could be a place also for Antonio Giovinazzi who this year had the opportunity to test himself out at the steering wheels of Ferrari, Sauber and Haas.

F1 | Minardi "This year Ferrari has all the papers to once more dream...