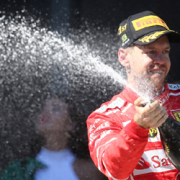 “After running up the stair the last step is always the hardest”, this was how Gian Carlo Minardi summarized the current situation of house Ferrari after its success at Interlagos and its confirmation as the world’s championship’s second force with Sebastian Vettel who consolidated second place in front of Valtteri Bottas.

“After the 2016 season poor in wins and with third place in the constructors’ title this year’s five wins and second place on the ladder is an important step to once more assert itself in the world championship, even though the gap from Mercedes is still wide as we saw in Brazil with Hamilton’s extraordinary come back which showed Mercedes’ potential, backed with excellent reliability,” continued the manager from Faenza.

“The Englishman was able to use the overboost for almost the whole grand prix putting in place an important piece of the puzzle for 2018 in which each driver will only have three power-units available.”

From next season the regulations will become even stricter for the duration of the Power-Unit with each having to run more than 7,000 kilometres.

“I find it truly absurd that the decision will cause an exasperated search for innovative materials (including oils) and a vertiginous increase in the costs with heavy repercussions, above all on the smaller teams. Let’s consider then that from 2021 there will be completely new planning with further increases in research. In addition, today the motorists are struggling to finish a weekend.”

“The errors of its drivers are weighing very heavily on the outcome of Ferrari’s season. Sebastian Vettel showed that he was nervous and fragile at a crucial stage of the championship (Baku and Singapore which was probably caused by knowing that he could not really compete with Lewis). Kimi Raikonnen once more was unable to bring to the team those points needed to win the constructors’’ title, but in any case Maranello has decided to bet on the Finn.”

“At one stage, believing that it had closed the gap with Mercedes, Ferrari tried to squeeze its components, however it lost reliability. It was an attempt that should have been made to find its limits and to truly understand what point had been reached. The recovery of reliability in the subsequent grands prix was mainly due to having taken a step back in its performance.”

We must acknowledge that Ferrari built a vehicle that was able to take to the road back to success and winning races that were not hoped for at the beginning of the season. In a week’s time at Abu Dhabi he will try to close the season with another success, Hamilton permitting.

F1 | Kubica-Williams, the contract is near. Minardi “Robert deserves...