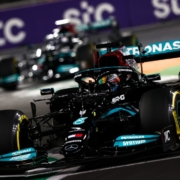 Both Hamilton and Verstappen want to take this title home at any cost and, to achieve their objective, they are willing to race at the limits of performance and the regulations. During the fifty laps they literally cut each other to pieces. They definitely have an edge over the others. They spared no efforts leaving the third placed Valtteri Bottas more than twenty four seconds behind.

For a good fifteen times Hamilton improved his fastest lap with Verstappen who was not to be undone answering his opponent’s every thrust. Verstappen’s start after the second red flag was a real masterpiece to be shown to all the young drivers entering into this world. He tried everything to take back the race lead.

Both Lewis and Max are showing and giving us the best part of Formula 1 and beyond the controversy we must let them drive and fight. Behind them there are two great teams and two top Team Principals who did not hold back cutting remarks and low blows. The tension is sky high and it is absolutely clear.

The conduct of the race was weak and the director and marshals decidedly lost control. I have not yet understood the first red flag that subsequently conditioned the whole grand prix. The Federation is slacking and what happened in recent weekends should be evaluated.

While I am writing here the final ladder is still sub-judice since there are a number of inconsistencies to be evaluated, including Hamilton’s collision with Verstappen. The fact is that in a week’s time they will race in Abu Dhabi, the twenty second grand prix, with Verstappen and Hamilton paired up.

Amongst the others, I would highlight the good performance by Antonio Giovinazzi who brought home two points, as well as the good struggle between Ocon and Bottas that ended with the Finn ahead in a photo finish. Unfortunately, in Alpha Tauri Gasly is left alone in the struggle with the direct rivals.