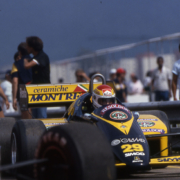 After the mess in Spa-Francorchamps Formula 1 is ready to restart from Zandvoort. In 1985 Holland hosted the final grand prix (won by Nikki Lauda) and I had the fortune to be present with Piero Martini at the wheel of the M185. Unfortunately for us the race lasted only a few kilometres with Piero forced to park the car on the side of the track.

However, I will tell you a brief anecdote since we have just “come out” of the Imola weekend with the Historic Minardi Day. Piero parked the Minardi right in front of the grandstand where Frits van Eerd was and for more than 60 laps he had our livery under his eyes. The colours of his brand Jumbo and of his current Racing Team Nederland with which he grabbed a fantastic second place at Le Mans are the result of that episode.

Zandvoort is a tough track, renovated with a raised section. The weather will be a major variable with wind and rain dominating. For the most of the drivers the track will be a novelty. The younger ones with the Formula 4 and/or Formula 3 behind them have already been able to get to know it. A full house is expected thanks to Max Verstappen and the fans have already declared the utmost sportsmanship, especially in regards to Lewis Hamilton.

We hope to witness a fine weekend and that Formula 1 will regain credibility.

F1 | GP BELGIUM, THE POINT BY GIAN CARLO MINARDI “THE ALLOCATION OF THE POINTS...