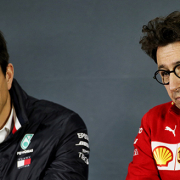 The British grand prix at Silverstone is the 10th round of the season. I am pleased to learn that the circuit has extended its contract with Liberty Media for the next five years as well. Ferrari is going into the “wolf’s den” where it won with Sebastian Vettel a year ago in front of Lewis Hamilton and Kimi Raikonnen. We are talking about a historic circuit that is particular and demanding and which will put the drivers and cars to the test.

One the one hand Ferrari’s Mattia Binotto fears the English track, defining it “…one of the season’s hardest tracks, a track where the car is put to the test in set up and balance, just as the tyres are strongly stressed”
On the other hand Toto Wolff is hoping for rain and milder weather for “his” engines after being forced to “survive in Austria” and he hopes for weather of about 28 degrees.

There is no doubt that Hamilton and Bottas are the rivals to beat. Ferrari showed signs of revival which unfortunately were not fully exploited. We are talking about a fast track with particular bends in which the safety-car and tyre wear will have an important role. Last year the gaps were in fact wiped out twice by the entry of the safety car. Therefore it will be an important variable to consider in the strategies. Hamilton will be looking for a comeback, also after the disappointing grand prix in Austria but he will have to be careful with the wear on the tyres that last year slowed the Finn. Ferrari and Mercedes will show up at Silverstone with different strategies, at least on paper: 4 Mediums and 8 Softs for Mercedes against the 3 “yellow” sets and the 9 “reds” for Ferrari.

The third factor will be Max Verstappen with the Red Bull Honda who will be energized by his first win for the season which put him into third place in the drivers’ ladder in front of Vettel. We hope that we will see an exciting weekend without controversy.

After its excellent start to the season McLaren comes to Great Britain after having confirmed its drivers after having shown once more that it has one of the best pair of drivers with 52 points to its credit and fourth place, twenty more than Renault which supplies its engines. The mood is high in Alfa Romeo as well after Antonio Giovinazzi’s first point at the “Ring” in Austria, together with the two by the Finn that launched the Swiss team into sixth place.

What’s happening in this Formula 1?