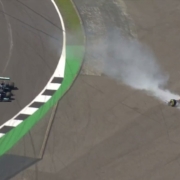 The first kilometres of the Silverstone Grand Prix were very hard, maybe too hard for Verstappen who tried to defend the leadership at any cost with the conclusion that he finished violently against the barriers at the Copse on the first lap after a collision with his direct rival.

I do not feel like putting all the blame on Hamilton but it could have been an accident with serious repercussions for Verstappen whose body absorbed more than 50Gs deceleration.

Besides the 10” penalty assigned to Hamilton I believe that the marshals should have summoned both drivers because I have the impression that it is going beyond a simple scuffle of the track.

It was not as if the championship were already finished beforehand but this zero points will rekindle the world championship considering that that Lewis reduced the gap to only eight points.

Behind the British driver was placed a perfect Leclerc, the author of a real masterpiece with a Ferrari that is certainly inferior to Mercedes and Red Bull. With the harder compounds it was not as competitive as Hamilton with the Mercedes but he squeezed his car to the full taking a result that was certainly unexpected on Thursday morning.

A different but interesting weekend has ended. I am convinced that the programme of the sprint race must be absolutely repeated but with a review of the format. I am a supporter of pole position taken with the fastest lap but the sprint race can be an interesting starting point for both the public and the teams and drivers, especially if the points system is extended to involve not only the first three finishers.