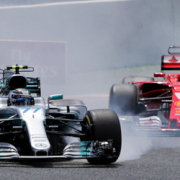 The Spanish Grand Prix, the fifth round of the F1 world championship, gave us another exciting race on the edge of hundredths of seconds between Ferrari and Mercedes. Strategies and team tactics played an important role in the final result, just as the overtaking manoeuvres and the close duels did, luckily unpunished by the marshals. The battle at the start was very good, as were Sebastian Vettel’s duels with Bottas first and then with Hamilton. The English champion then took the lead with a great display of force as he also took the fastest lap of the race two laps from the finish and thus claimed the pole, race and fastest lap triple.

Barcelona gave us a very reactive Ferrari that knew how to reply very well to the many changes introduced by Mercedes, managing to reduce the gap even more. The car from Maranello is a strong machine and put together very well that reacts to the developments.

The force of these two teams in regards to the other teams is devastating. Third placed Daniel Ricciardo finished 70 seconds behind and all the others were more than a lap from the winners.

It was a pity that the accident immediately knocked out Kimi Raikonnen, thus forcing his Ferrari team mate to fight alone against the two Mercedes that were able to take advantage of team tactics. Ferrari and Mercedes will go to Monte Carlo close on the two ladders where Fernando Alonso will be missing for his home race after having given a show of his enormous talent taking the McLaren-Honda to seventh spot (a near miracle) and improving his performance in the course of the race up to the final lap. I wish him the best of luck for his adventure in the Indianapolis 500, even though I do not agree with it as the race requires specific preparation.

This weekend we saw important signs of change on the part of Liberty Media. The interviews with the drivers in direct contact with the fans were excellent, as well as the quick reaction to the tears of the very young Kimi Raikonnen fan after the driver’s exit when he was brought to meet his idol in the pits. In forty years of activity I had never seen anything like it.

It was a grand prix that gave us important surprises in the back markers such as the precious points brought home by Force India, Sauber and Toro Rosso.

We anxiously await the next chapter.

5000 enthusiasts at the Imola Circuit formalize the success of the second edition...

Indy500 | A phenomenal Fernando Alonso is already a legend.
Scroll to top