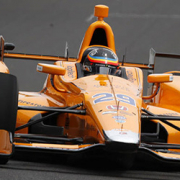 A fifth place in qualifying for Fernando Alonso is not a result of note, but if it comes in his debut in the category at the Indianapolis 500 it certainly has the flavour of a feat, In the five laps of qualifying Nando was able to improve with each lap managing to equal the feat on another legend.

“In the 106 year history of the Indy 500 no Formula One driver managed to do better than Fernando Alonso in qualifying. He managed to equal the result of Jim Clark in 1963. It is the confirmation of what I have been saying for years, independently of his results of the last few seasons. Fernando remains one of the best drivers on the grid,” commented Gian Carlo Minardi who brought the Spaniard to his debut in Formula 1 in 2001, “His arrival is of great benefit to the category. A positive result in the race as well will place him definitively in the category of motor sport legend, as if he still needed to do so, had earned the right to this title with this result. I wish him the greatest luck and Sunday I will barrack for him,” concluded the manager from Faenza.

The path at the wheel of the Dallara-Honda entitled McLaren of Andretti Sport with the number 29 began by brilliantly overtaking the rookie Orientation and then he presented himself in the bowl of Indianapolis together with all the other drivers to best prepare the four laps available for qualifying, becoming one of the most active on the track. In 19 days he wrote an indelible page in the history of motor sport. Sunday 28th he will try to complete the task. In any case Nando has already won his challenge with the Indy 500.

We await a sensational weekend. The Monte Carlo Formula One Grand Prix and the 500 miles of Indiapolis.

F1 | Gp Monaco, Minardi “Ferrari is favoured due to its shorter legs...
Scroll to top