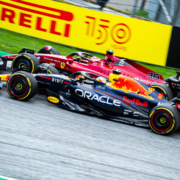 Hungaroring: on paper the track favours the Ferrari of Charles Leclerc and Carlos Sainz Jr. Ferrari must try to restart with a double in order to try and reopen the world championship that at this moment is in Max Verstappen’s hands with a 63 point lead on the driver from Monte Carlo.

A tryptich is opening that will say a lot about the outcome of the season: Hungaroring, Spa-Francorchamps and Zandvoort with Monza immediately after. They are three very different tracks between them but very demanding for drivers and cars. I am convinced that not all is lost for Ferrari but it must exploit every opportunity without giving any more gifts to its rivals. They will be three decisive rounds to understand if there will be the possibility to recover or if they have to race to win the greatest number of grands prix. The team is fighting at high levels after some difficult seasons.

The Red Bull-Ferrari tussle is giving Formula 1 appeal and it is important keeping the world championship open. We are entering into the last ten grands prix of the season and reliability will be a sore point for many.

Mercedes has been the most skilled up to now, with Red Bull paying at the start of the season. The W13 had shown strong improvement that it is now called to confirm. Up to now they have been very good at reaching the podium not such much for their own merits but dues to the mistakes of others. Today they have a car for fifth or sixth place. At Spa-Francorchamps we will be able to see its true potential.