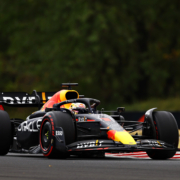 It should have been the weekend of the Ferrari double and instead both Sainz and Leclerc finished off the podium. It was certainly a day for Ferrari to analyse since they made a number of mistakes in both the strategy and during the pit stops, especially with the Spaniard.
In these circumstances the car fell short of Red Bull and Mercedes. With the same tyres Mercedes with Lewis Hamilton performed decidedly better, so much so that the British champion set the race’s fastest lap.

At the moment the Ferrari package is not ready to win the world championship. Carlos Sainz and Charles Leclerc, protagonists of excellent overtaking and defence were blameless. However, with the fourth and six places they left many points to their direct rivals, just as Ferrari did a favour to a strongly growing Mercedes. They have three weeks ahead of them to ponder and plan the last part of the season in the best possible way with the aim of saving at least second place in the constructors and drivers championships.

This is not a surprise because they made us used to even more impressive comebacks but Max Verstappen deserves the title of “driver of the day”. He was the protagonist of a race in all out attack to then manage to advantage he had acquired. He made only one mistake that could have cost him very dearly, but he was good and lucky to take back control of the car. He is supported by a team that is aware of its strength and they work calmly without making any mistakes. At this point of the world championship they only have to manage the large advantage they have accumulated.

For the second consecutive grand prix Mercedes went onto the podium with both its drivers making a great leap forward on the ladder. The modifications carried out are paying off and they have taken away points from Ferrari whose advantage has been reduced to only 30 points.

I wish you all happy holidays and I look forward to seeing you on Saturday 27 and Sunday 28 at Imola for the sixth edition of the Historic Minardi Day.