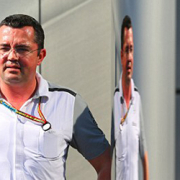 A few days ago I told you about my conclusions on the situation within the McLaren Team after the departure of its C.E.O. Jost Capito and team manager David Redding (who will go to the Williams Team), together with the possible collaboration with BMW on the Formula 1 front with the supply of the next Power-Unit.

Following my considerations I was contacted from inside the Woking Factory who let me know through the words of Race Director Éric Boullier of how the Team’s reorganization is proceeding which left me favourably impressed.

These are Boullier’s words:
Dave Redding had been offered an opportunity with another team and we did not want to get in the way. Let’s not forget that Dave had been with McLaren for 17 years. His place will be taken by Paul James (who had already been the Team’s Chief mechanic).

The position that Paul James left free will be entrusted to Karu (Lammenranta) – the former number one mechanic of Alonso’s car who will be the new Chief mechanic.

Andrea Stella will carry on in his role as the supervisor of the track side engineers and his duties will be expanded to involve the sporting relations between the Team and FIA.

Éric Boullier when on by emphasizing “When we understood that Dave would leave we were able to enlist entirely from within the Team. Over a long period of time we had been encouraging people to study science, engineering, technology and mathematics at local schools and to support apprenticeships and university theses with the aim of introducing better prepared young talents into McLaren.

A programme with which I agree because it coincides with the Minardi mentality, in other words to mature people within the Team and, at the same time, collaborate with Universities to bring better prepared young people into the organization and at the same time encourage loyalty towards the Company. By so doing it is possible to create a hard core to the Team thus creating the conditions for another winning cycle.

With the exit of Ron Dennis, the new General Director Zak Brown, – an expert marketer –will have the task of reorganizing McLaren and in an interview released on the American site Roundandtrack had spoken about the possibility of success in 2017 “I do not believe we will win a Grand Prix this year”. Every reorganization takes time.

I thank the whole staff at the Factory to whom i wish the best of luck for the upcoming presentation of the car (February 24th) and the 2017 racing season.