Blog - Latest News
You are here: Home / F1 / Formula 1 of the future, Minardi “Plaudits for Liberty Media, but it i... 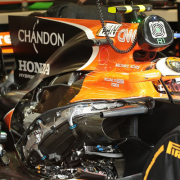 Since its entry into Formula 1 Liberty Media has wanted to leave its mark on the world championship with the aim of bringing back the public and the aficionados with the introduction of changes that created the first break from the previous management. The initiative of bringing the cars and drivers outside the paddock during the race weekends is appreciable, winning over the historic centres of the capitals or the new presentation of each driver that preceded the start of the Austin grand prix.

“Liberty Media is setting a very American stamp on this new era of Formula 1 and is aiming decisively on the choreography as we saw in Austin. Even though these changes will not be decisive for improving the spectacle on the track they have brought a whiff of fresh air on the front of pre starting grid news,” said Gian Carlo Minardi

The latest proposal in order of time concerns a starting grid with a front row composed of three cars so as to increase the chance of a scuffle in the first part of the race. On the technical regulations front, beginning next year each driver will have available a maximum of three power-units for the entire season (against this year’s four units). The declared aim is to limit the costs.

“If on the one hand this is an important step for taking this technology to the cars on the production line, on the other hand it certainly does not bring about a reduction of costs. In fact, it will bring about even more intensive development of the various components that must last seven grands prix with the result of a dizzying increase in costs. If today there are constructors who are finding it difficult to reach the required distance I don’t dare think what could will happen next year,” continued the manager from Faenza who points the finger at the current system of penalties for the substitution of the motor or its principle components.

“I find it absurd that the driver has to pay for a technical problem with incredible penalties that unsettle the fans. When I read penalties of 20-25-30 or even 35 places in a grid composed of twenty drivers I almost want to smile. The first few times I did not want to believe it. The team should be responsible by paying a monetary sanction or losing points on the constructors’ ladder.”

If on one side they want to give longer life to the motors, on the other side Liberty Media wants to eliminate Friday’s free practice in favour of a season of 25 grands prix.

“This is a high number of grands prix as well as a very heavy commitment for those involved (f it is difficult or the smaller teams to organize the turnover of mechanics and engineers) as well as for the spectators. They would be forced to run in specific periods of the year such as holidays and summer. Will such an intense calendar really favour the audience?” emphasized Minardi.

“It is not easy to change the format and to find the right equilibrium. However, I am of the opinion that they must intervene in one specific area. This is the work group around Charles Whiting to avoid the unpleasant episodes that can falsify the result of a race. Just as there is a single race director it would be proper having a single work group of marshals from the beginning to the end of the season. Only this way will it be possible to limit the chance of errors or subjective judgments.”

“In addition, they could install suppressors to avoid drivers exceeding the track limit. A lot of work has been done on the safety of circuits by having asphalted runoffs. This gave increased safety for the drivers. The post race penalties have damaged the image of the sport and unsettle the spectators,” concluded Gian Carlo Minardi on his return from Padua’s Salone Auto e Moto d’Epoca together with ACI and ACI Storico.

The declarations of President Sergio Marchionne made at the Mugello circuit during the Ferrari World Finals concerning the stay of the team in the F1 world championship will certainly be the subject of much discussion, but it must also gives the new owners something to think about.

The world championship cannot be only a show because Ferrari is an important constructor, just like Mercedes, Renault and McLaren, and as such they have interests tied to the development of technology that can be taken to street cars.

F1 | Gp Brazil, Minardi “Mercedes will try for the triple”
Scroll to top